The Net approach suggest that the market value of the firm is not affected by the capital structure changes and overall cost of capital remains constant like NI approach, it is also based upon certain assumptions which are :

Where D/E is the debt-equity ratio at market price. The equation 2 states that if Ko and ki are constant, then Ke will rise linearly with leverage. Thus there is no single point or range where the capital structure is optimum. Graphically, it can be represented as follows: 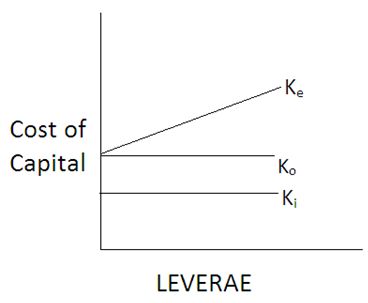