Characteristics of Maxima and Minima

The essential characteristics of maxima and minima of a function may be outlined as under:

(ii) There may be several points of maximum and minimum is a function graphed as under : 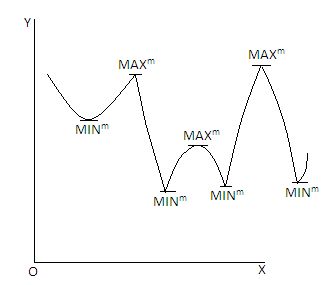 (iii) The maxima and minima of a function always occur alternatively.

(v) There may not be any point of maxima, or minima in a function graphed as under. 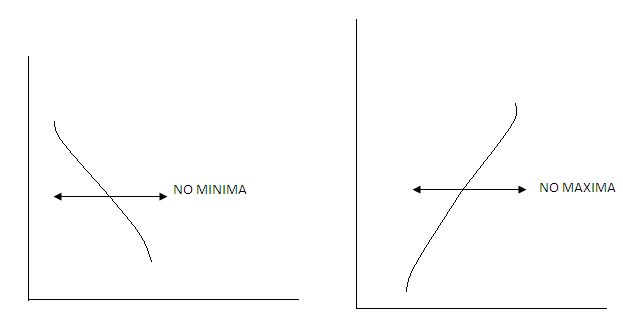 From the Fig. 3 above, it must be observed that in both the sides of the bending point O, the curve moves upward. Therefore, at all the points to the left and right of the bending point, the values of the first derivative dy/dx  must be positive. This point O is called the point of inflexion since, there is a bend of the curve at this point, where  dy/dx = 0. At this point d²y/dx²,  is also equal to zero as this gives neither maximum, nor minimum point.

(vi)   At a point of maxima, the function ceases to increase and begins to decrease, and the value at this point is higher than any value on either side of it. This can be seen from the following graph. 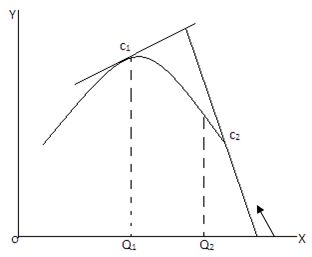 (vii) At a point of minima, the function ceases to decrease, and begins to increase, and the value of the function at this point is lower than any value of either side of it. This can be seen from the following graph.

(viii)  The point at which a function has maximum and minimum values are  called turning points where  dy/dx = 0, since it is a continuous function of x which can change its sign from a positive to negative, or vice versa only by passing through a zero value. But at this point  d²y/dx² ≠ 0. If, at a point d²y/dx² = 0, the same is called a point of inflexion where, the function does not changes its sing. This can be verified from the graph under Fig. 3 and Fig. 4 drawn above.

The values at points of maxima and minima are called turning values or the extreme values.