Rank of a Matrix

By the rank of a matrix we mean the order of the largest square sub-matrix, whose determinant is not zero. There are two different methods of determining the rank of a matrix. They are: (i) Trail method, (ii) Elementary operation method. These methods are explained as follows:

(i) Trial Method. Under this method, we are to try with all the possible square matrices of different orders and exhaust them one by one till we get a determinant whose value is non-zero. When any square sub-matrix is detected of having a non-zero determinant the process of trial is stopped and the order of the matrix to which such square sub matrix belongs is concluded to be the rank of the matrix. The method of determining the rank of a matrix is, no doubt, an arduous one unless by a stroke of chance we detect the largest square sub matrix whose determinant is not zero at an early stage.

The following illustrations will show how the rank of a matrix is determined under both the methods enumerated above.

Using the trial method, determine the rank of the following matrix: 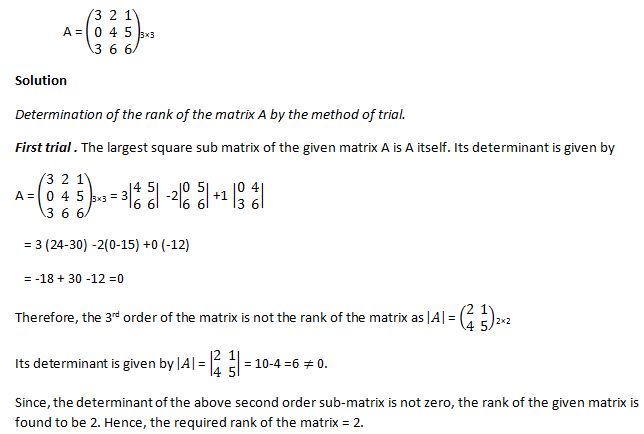