As the name suggests, these variations are of irregular and indefinite pattern. They do not repeat in any definite pattern. They are generally mixed up with seasonal and cyclical variations, and are caused by purely accidental and random factor like, earthquakes, floods, famines, wars, strikes, lockouts, epidemics, and revolutions etc. These variations are also, otherwise called erratic, accidental, random or episodic variations. They include all types of variations in a time series which are not attributable to trend, seasonal or cyclical fluctuations.

In the words of patterson, “The irregular variation in a time series in composed of non-recurring sporadic form which is not attributed to trend, cyclical or seasonal factors.” 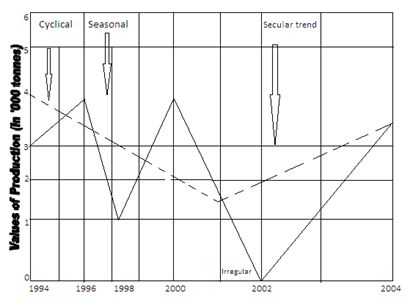 There is no regular period, or time of their occurrences. Their effects are also unpredictable and they cannot be totally isolated from the effects of seasonal and cyclical fluctuations. As such, no advance preparation can be done to meet with their consequences. Normally, they are short-term new cyclical or other movements.