(i)  Meaning and Purpose

Kurtosis is a statistical measure which is calculated on the basis of Moments to bring about another characteristic of a series. This characteristic refers to the flatness, or peakedness of the curve obtained from a series. A series, when plotted on a graph paper may produce either of the following three types of curves.

It is to be noted that the word Kurtosis is a Greek word which means bulginess. Similarly, in Greek language, a normal curve is called Mesokurtic, a more flatted curve is called Platykurtic, and a more peaked curve is called a Leptokurtic. The sketches of these types of curves are given here as under: 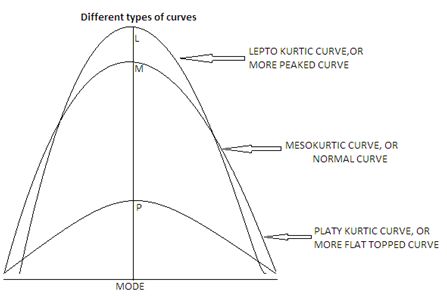 Characteristics of the curves

According to the famous British Mathematician W.S. Gosset (Student) Platykurtic curves, like the platypus, are squat with short tails, Lepto kurtic curves are high with long tails like the Kungaroos noted for leaping. To illustrate his statement, Gosset gives the following sketches of the Platy kurtic and Leptokurtic curves: 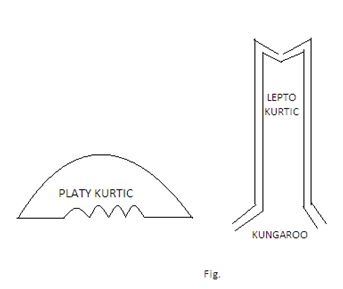 However, the measure of Kurtosis has been defined differently by various writers. Some such definitions are reproduced here, for a better understanding. Of the readers:

From all the above definitions, it must be clear kurtosis as a measure, refers to the flatness or peakedness of a curve obtainable from a distribution.

There are two constants or co-efficients through which Kurtosis of a series is determined. They are (1)

According to Prof. Karl Pearson, Kurtosis of a series can be measured by  (beta two) which is equal to

Among other things, kurtosis as a measure of statistics is particularly useful in the following matters: